With the increase in the Bank of Jamaica’s policy interest rate, by 4.5%, JMMB Bank will be increasing the interest rate on our variable interest rate loans, by no more than 1.5%, effective August 1, 2022. Please contact your representative with questions or to have a conversation, if you wish to explore options that would assist you in this transition.

Standing for the greatness of all humanity 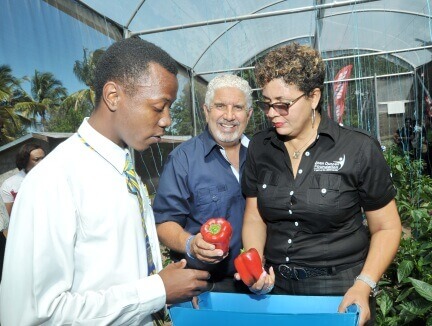 Giving everything we can for the betterment of life and love

Our Vision for Love encourages us to extend beyond the walls of our company and give back to the communities that have given us so much. In the spirit of our generous co-founder, Joan Duncan, we are committed to doing our part to share in the inter-relatedness of all life.

In this vision, the JMMB Joan Duncan Foundation is JMMB’s way to actualize our social responsibility, through volunteering and empowerment.

Do you want to partner with us?

Get in touch with us

The JMMB Joan Duncan Foundation’s Conversations for Greatness is a transformational project in support of the Ministry of Education’s Operation Turnaround initiative.

Looking to help? We need volunteers, cash and in-kind contributions.

Looking to help?
Donate through the Joan Duncan Foundation JMMB Bank accounts below: 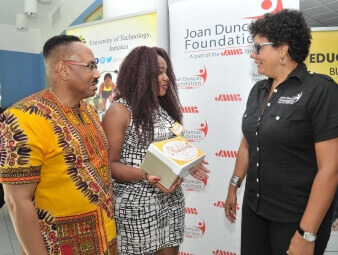 Why we give back

When giving back to our community, we have three actionable goals in mind. 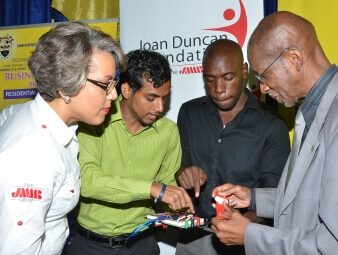 How we give back

Here are just some of the ways in which we seek to impact the community and the nation:

National Projects: To make a difference, both the little things and the big things matter. On a national scale, we help by empowering communities. Sometimes, that means employing youth to give them a start in the working world. At other times, it means coaching local football teams on a volunteer basis, to forge strong teams and values. Still, at other times, it means creating programmes to help children make the best possible decisions.

Education: Education is one of the most powerful weapons we have to combat poverty. We believe in education, which is why we sponsor scholarships for our nation’s youth. This gives them the chance to learn, grow, and share in the empowerment that a sound education provides.

Transformational Training: In order to transform the world, we must first transform ourselves. That means we must take steps to enhance personal growth, facilitate positive self-discovery, and build our core values. We host transformational training sessions to help participants to reach their full potential.

Community Involvement:  Our vision of love sees us transforming communities for a more prosperous nation.  Through the network of JMMB branches, Team members are able to be involved in initiatives for community development through volunteerism and financial support.  We all play our part to make a difference in our communities.

In her capacity as Chair of the JMMB Joan Duncan Foundation, Patricia Sutherland brings her expertise in the areas of management, operations, and strategic planning, to drive the corporate social responsibility initiatives of the JMMB Group in Jamaica.

With a passion for enabling people to realise the greatness within themselves and their communities, Patricia is responsible for charting the course of activities of the Foundation, in a way that supports nation-building, to the benefit of all.

Prior to her appointment as Chair, she has worked in various capacities throughout the JMMB Group. She also speaks French and holds a B.Sc. in Pure and Applied Chemistry, from the University of the West Indies, Mona.

Our goal is to create a positive culture, built in a core of love, for the future leaders of Jamaica.

In 2011, the University of Technology, Jamaica (UTech) forged a partnership with the JMMB Group. Our combined objective was to promote ethical standards in business, reduce corrupt practices in aspects of Jamaican life and foster socio-economic development.

UTech’s President, Prof. the Hon. Errol Morrison, OJ in welcoming the partnership with the JMMB Group. He notes that the School will be an important beacon in the teaching of business, entrepreneurship, ethics and leadership at the tertiary level, saying “[This school] will transform ethical principles in business leadership and boost the cadre of entrepreneurs with the capacity to spawn social and economic development.”

JMMB’s Group Executive Director of Culture and Human Development, Donna Duncan-Scott, emphasizes the importance of the inclusion of “ethics” as a critical component in the mandate of the School. She laments that Jamaica still ranks high at 87 on the 2010 World Corruption Index, noting that, “we would like to honour Joan Duncan’s memory and legacy by making an endowment to UTech, the proceeds of which will be used to build and sustain the School of Entrepreneurship, Ethics and Leadership, expand her legacy and further her life’s work by engaging in activities that advance the principles for which she stood and lived true to, for the benefit of our country Jamaica.”

The School’s $80 million dollar endowment fund will help to advance teaching and research in entrepreneurship, economic growth, moral considerations in business decision-making, human rights and globally conscious leaders. The activities of the endowment fund will include:

Joan Duncan, a supreme entrepreneur guided by high ethical standards, introduced and developed the Money Market concept in Jamaica in the early 1990’s in partnership with JMMB’s co-founder, Dr. Noel Lyons. Joan rose from humble beginnings – once a dressmaker; she did the hard work to get qualified in the area of finance and banking and developed the critical competencies to successfully start and grow a new business grounded in the core values of love, respect, compassion, honesty, and integrity.

Explore the JOAN DUNCAN SCHOOL OF ENTREPRENEURSHIP, ETHICS AND LEADERSHIP AT UTECH

"Thank you all for being a part of my journey, for helping me create the space for some real healing to happen, and for reminding me of my greatness." - Conversations for greatness participant